The Complete Guide to Aquariums

The word aquarium originates from the ancient Latin language, aqua meaning water and the suffix rium meaning place or building. Aquariums are beautiful and look good anywhere! Home aquariums are becoming more and more popular, it is a hobby that many people are flocking too and fish shops are on the rise. Fish are generally easy to keep although do they need quite a bit of attention. Puppies and kittens were the typical pet but now fish are becoming more and more frequent in house holds. In recent years fish shops have noticed a great increase in the rise of people wanting to purchase aquariums and fish, the boom has been great for local shops as the fish industry hasnt been such a great industry before now.

The Arrangement of Indoor Aquariums 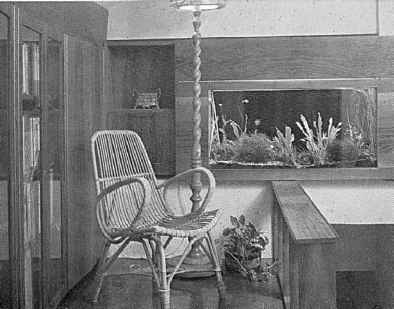 It also goes without saying that the density and kind of growth is chosen according to whether or not the aquarium will be inhabited by fish and the kinds and number of fish kept. In accordance with this, the types of plantings for aquariums can be divided into several groups. Aquariums planted in this manner require very little maintenance. In order to prevent them from becoming overgrown by algae, a few snails may be added. Water should be added every 2 to 4 weeks to replace that lost through evaporation. These decorative aquariums can be placed in a flower corner with potted plants or separately potted plants grow very well in the vicinity of aquar- 4) An aquarium for the plant specialist. Little can be said about this type of aquarium. The preference is usually confined to certain plant groups (such as Aponogeton, Echinodorus, Cryptocoryne, etc.), so the aquarist usually has a fairly good knowledge of the requirements of the plants and how they limit his arrangement of the...

The Importance of Plants in the Aquarium

Biological balance is the basis of a good relationship between living organisms. The aquarium hobby is mostly interested in the keeping of fish in indoor aquariums, but since the lives of fish are closely interwoven with the lives of the plants, aquatic vegetation is an integral part of aquarium science.

Temperature And Heating Of The Aquarium

Aquariums are generally heated for the benefit of the fish, not the plants. Tropical plants usually need temperatures ranging from 66 to 77 F (19 to 25 C), which fortunately corresponds to the requirements of tropical fish. Aquatic plants from the temperate zone can all stand temperatures of about 68 F (20 C) except those from cold spring waters, which are not recommended for home aquariums anyway. It is not necessary to go into details of water temperature in relation to their cultivation in aquariums with a temperature of 68 to 77 F (20 to 25 C). If we have an aquarium with fish from the temperate zone, the aquarium being left unheated in the winter and reaching low temperatures of 50 to 59 F (10 to 15 C), we should likewise use temperate plants from Europe and North America, At the other extreme are spawning aquariums where the temperature is often increased to 82 to 86 F (28 to 30 C) here only tropical plants can be used, as temperate or subtropical species die at such high...

Idiot Guide To The Marine Aquarium

Blue-greens form a slimy covering of thousands of cells in a gelatinous matrix. This covering not only looks bad and interferes with the leaves of higher plants, but actually smells like a swamp. Fortunately the film is seldom attached and can be removed mechanically from the substrate and plants. These algae are very dangerous in large quantities and could eventually destroy all other life in the aquarium if not controlled. They develop mainly in fresh tap water, especially if it contains a high percentage of calcium salts. They often appear in newly established aquariums or when a large proportion of the water is changed too frequently and is replaced by hard tap water.

3) Species that do not flower in aquariums or do so only rarely yet also do not reproduce vegetatively. Such plants are raised in emersed cultures (paludariums or terrariums) and usually flower there quite easily. Seeds are sown in humid soil and the young plants can be replanted underwater into aquariums. Under these conditions generative reproduction is very laborious but extremely productive. It has one disadvantage plants grown from seeds do not always resemble their parents in quality and appearance, as do plants produced vegetatively.

Illumination of the Aquarium 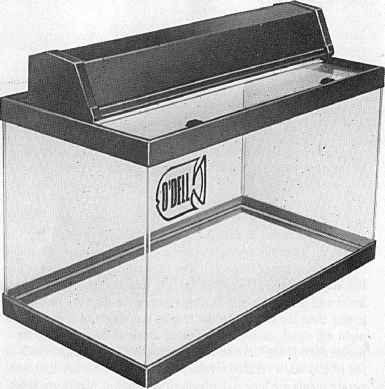 The length of the day changes in the temperate zone with the change of seasons. In spring the day is as long as the night on March 21. Then the days get longer and are at their longest on the first day of summer (June 21). The shortest day of the year is the first day of winter (December 21). On this day the night lasts 16 hours and the day only 8, During summer the days are essentially longer than the nights. In the tropics the length of a day and a night are equal, each of them lasting about 12 hours. In the temperate zone plants have in consequence much more light than in the tropics when totalled for the year. We therefore say that temperate plants are long-day plants while tropical plants are short-day plants. Only during the time of the spring and autumn equinoxes do our aquariums have a tropical day. For that reason tropical plants usually put out flower buds and flower by slow growth one to three months later. Tropical plants do not mind a longer period of light than they are...

General Principles for the Cultivation of Aquatic Plants 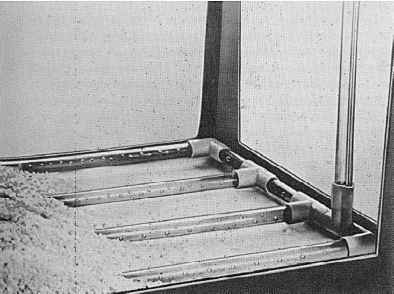 Readers should not be influenced by various publications and pictures illustrating tiny plants grown in clean sand and giant plants growing in fertilized soil or industrial nutrients. How would such pictures look when taken one, two, or three years laterP By then the influence of anaerobic decomposition and poisonous gases will have become obvious. If you do not believe this, just check the aquariums of the professionals who acclimatize newly imported plants you will find only clean, washed sand, never soil or fertilizers. 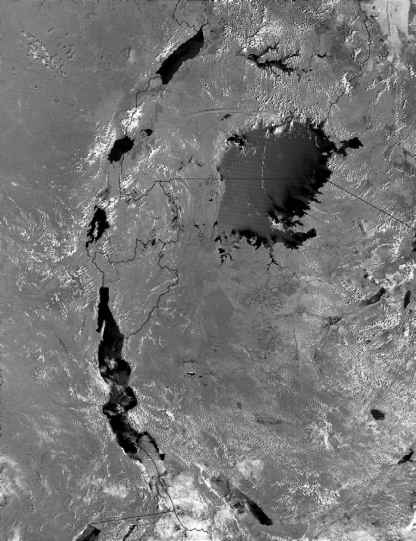 A teacher of mine once simplified his complex family history by saying that he, like all of us, originated from Olduvai Gorge in Tanzania (the 'cradle of mankind'). Tropical Africa has been a cauldron of diversity not only for our own species. It is, to take one example, surprisingly fishy. The Great Lakes of East Africa (Figure 1.1), and surrounding rivers, contain a whopping 1500 species in just one fish family, the cichlids, familiar to freshwater aquarium enthusiasts. This makes cichlids the most species-rich family of vertebrates, beating such diverse and familiar groups as songbirds and mice. They are so diverse that many still await proper scientific description, and many more are doubtless completely undiscovered. Lakes Victoria and Malawi each contain about 500 species, and about 250 species are found in Lake Tanganyika. Diversity of this sort is what makes our planet such an interesting place, and of course, we have to find out what caused it.

The diatoms are brownish algae commonly seen in aquariums, They are unicellular and generally live attached to the substrate, the aquarium glass, and plant leaves. Shaded situations are preferred, so they tend to appear in largest numbers in poorly lighted aquariums, especially during the autumn months when

Relatively few successful hybrid plants have found their way into aquariums as yet, but the capacity for hybridization is found in many species of aquarium plants. In nature hybrids between some species of Echinodorus, such as E. cordifolius and E. berteroi, are known. Yet it is not really certain that these are true hybrids, for the possibility remains that they are merely forms or variants of the species. Artificial hybrids of these Echinodoms have not yet been created in the aquarium. In Aponogeton, however, hybridization is common. It has been proved that the Asiatic A. crispus, A. echinatus, and A. natans can be easily crossed.' Because the subject is rather complicated, it will be treated in detail later.

There are many ways that exotic species are introduced into freshwater areas. They include the release of pet fish or foreign species brought in for entertainment in public or commercial aquariums or for education. In addition, the demand for bait fish, the captive rearing of fish, and the unintentional transfer of species by ship ballast water all contribute to the introduction of exotic species in freshwater areas. However, typically exotic species are introduced into marine areas by means of transplanting or commercial shipping. It has been reported that ship ballast water is responsible for the transport of approximately 3000 species worldwide each day.

Sterile plants can be determined only with difficulty. Some plants of this genus are imported occasionally for aquariums, but This slow-growing species from Europe differs from I. lacustris by its thicker rhizome (10 cm long) and fine, short-pointed leaves. Both species grow under the same conditions in nature. It requires very cool water and soon dies in aquariums. These are not desirable plants in aquariums because they can grow too profusely, like a weed. Under different situations in nature Azolla is regarded to be an undesirable weed or a very beneficial plant. The Azolla - blue-green alga combination fixes atmospheric nitrogen and is widely used as fertilizer and as forage. Azolla is best suited for terrariums and paludariums it can provide small shallow pools with a decorative growth or cover the surface of moist sand with a varied red-green mosaic carpet. The following species of Azolla (water-velvet) are cultivated. This species is probably the most convenient for aquariums.... 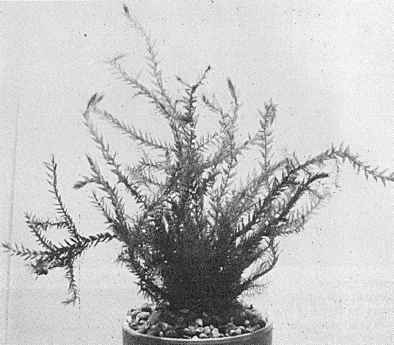 Mosses are minute plants living in the most varied places, from dry rock to water. These plants propagate by spores. Very little attention has been paid to mosses in aquariums and terrariums. In spite of importation difficulties, a great number of amphibious and aquatic species do quite well as very decorative additions to the list of aquarium plants. There are many beautiful forms for both terrariums and aquariums. They grow like curtains of fine leafy lace which, combined with carpets of other plants, can add a strange charm to the tanks. Only those examples that are known to do well in aquariums are treated here. Fontinalis belongs to the family Fontinalaceae, which comprises water mosses with floating and rooted forms. They grow in running streams as well as in stagnant water of ponds, bafckwaters, and wells. The firm glossy green water mosses with ovate to lanceolate leaves belong to the genus Fontinalis. These plants rarely produce spores but propagate vegetatively. The family...